A day off for me and a couple of hours on the marsh with a start along Moorditch Lane where Blackcap and Common Whitethroat still herald the summer and busy putting food in young hungry beaks. No.6 tank held a small amount of wildfowl and included Common Shelduck, Mallard, Northern Shoveler and Eurasian Teal. The Black-tailed Godwit flock numbered c300 feeding in the sludge pool with a single Avocet adding a splash of monochrome.

The numerous Reed and Sedge Warbler were frequently observed during my walk with several Reed Bunting adding to the scene.

Another flock of c200 Black-tailed Godwit were feeding on the ‘phalarope pool’ alongside a pair of Canada Goose and their single gosling.

A juvenile Kestrel sat on the outside nest box chilling out in the muggy atmosphere, while a Brown Hare must have had too much sun as it was shadow boxing in the field on its own. Another 2 were also seen during the day.

A Field Vole crossed my path a Weasel thought better of it and darted back into the vegetation when it clocked me.

I wandered out this morning with a start at Ince.

A pair of Little Ringed Plover are still defending their territory and were calling loudly attempting to distract me as I made my way along the lane.

A Peregrine was rising up on the thermals created from the hot air emitting from the GrowHow Works fertilizer plant, while a group of young Barn Swallow were on the fence of the pallet yard waiting to be fed by the parents. A family party of Common Whitethroat were nearby.

Again both Sedge and Reed Warbler were active on No.4 tank and a Brown Hare made its way along the track.

At this time of year there are many family groups of birds about and it’s hard to single out individuals, but mummy, daddy and sibling Kestrel were collectively hunting on the bank on No.6. A juvenile Common Buzzard sat calling on a fence post hoping its parent was close by to feed it.

A pair of Avocet and their two chicks were on a scrape on No.3 and so intent on protection the adults even drove away their duck equivalent, a Common Shelduck, this was followed by another adult Avocet chasing away a Common Buzzard.

The Black-tailed Godwit flock were feeding in the shallow waters on No.6 alongside reduced numbers of Common Shelduck, Mallard and Tufted Duck, plus the many Coot and their young.

Along Lordship Lane a Yellow Wagtail was seen to drop in to a wheat field and 2 more Brown Hare were noted.

A walk along Brook Furlong Lane and the River Weaver this afternoon. A Cetti’s Warbler and a Grasshopper Warbler were singing in close proximity to each other near to the old birdlog while a Willow Warbler sat on the telegraph wires above.

A Chiffchaff and Chaffinch were also vocal and a Sedge Warbler was seen near to the river. Nearby, a Green Sandpiper flew over Redwall Reedbed and an Avocet, Oystercatcher and Common Redshank were along the river.

A Lesser Black-backe Gull was seen to snatch an Avocet chick from the far bank while its parents mobbed it in vain.

A Common Shelduck and its brood sought safety in numbers and mixed in with a large group of other Canada Goose goslings.

There were 6 adult Great Crested Grebe were on the river together and not a single chick between them?

Butterflies were out in force with many Small Tortoiseshell, Meadow Brown, Large Skipper and a few Painted Lady and a single Brimstone. 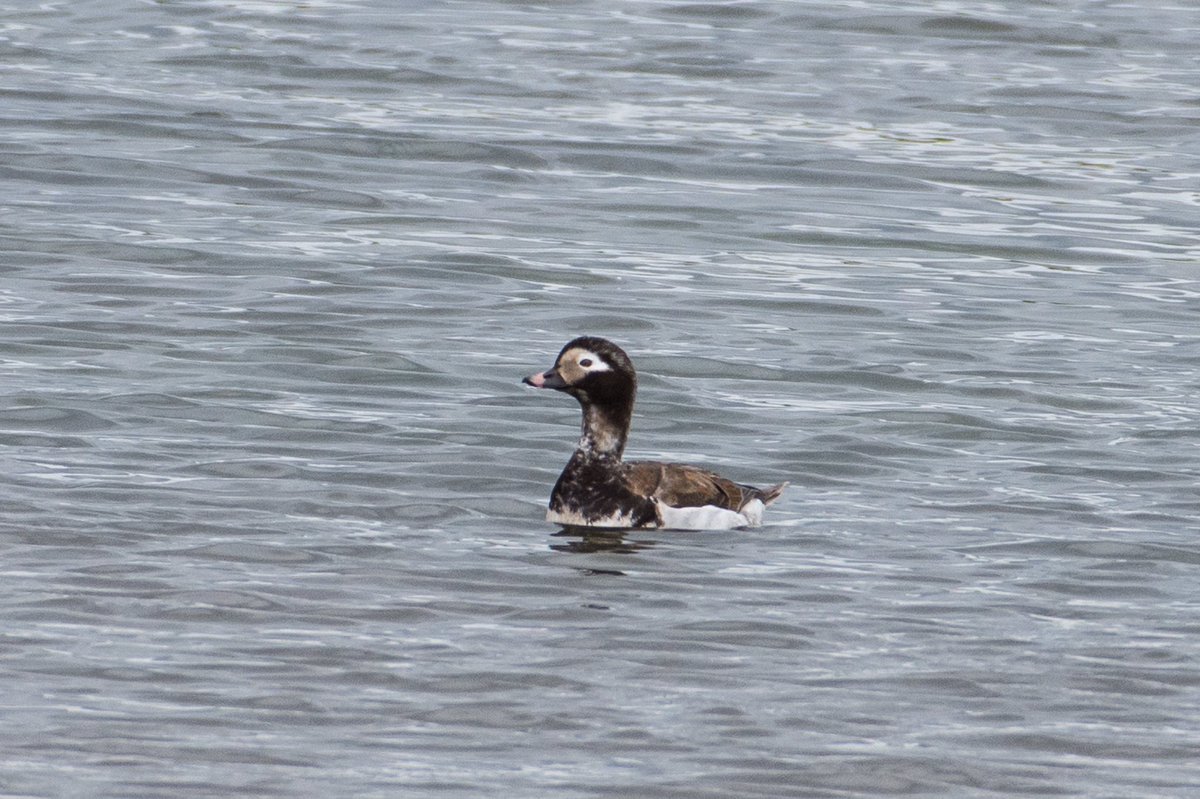 The Long-tailed Duck was still in situ on the ‘phalarope pool’ at the west end of No.3 tank.

An after work walk along the track that separates No.5,No.6 and No.3 tank.

The Avocet parents were very agitated whenever a gull flew over and they even had a go at me for pausing too long on the track. The reason for their anxiety was a couple of their chicks wading and swimming through and on the shallow pool.

The ‘phalarope pool’ lacked its recent star and presumably it’s heading to the frozen north?

Common Buzzard hangin' in the wind on the #darkside of the #WildMersey at Hale lighthouse. #patchpoaching 😉 pic.twitter.com/TdbRm1F1v9

I started my walk and subsequently my monthly WeBS count for the BTO at Ince this morning and then for the high tide period. The pools at Ince are overgrown making it difficult to assess an accurate count, but 18 Mallard, 6 Common Shelduck, 2 Tufted Duck, 3 Little Grebe and 2 Oystercatcher were viewable.

Walking alongside the Manchester Ship Canal there were more Mallard and Tufted Duck with the addition of a single Great Crested Grebe being on the water. Passerines featured Common Whitethroat and Chiffchaff which were busy feeding their young by the canal path.

The Long-tailed Duck was again on the ‘phalarope pool’ with several Eurasian Teal and a single Black-tailed Godwit for company. Further along the track were many Common Swift hawking at head height with both House and Sand Martin present.

Back near Ince Berth a pair of very agitated Little Ringed Plover were trying to draw me away from their territory by faking a broken wing display, and did likewise when a Brown Hare approached them to close.

The drake LTD is still present this morning at the west end of No.3 tank, #FrodshamMarsh per Paul Ralston. Video by me.. pic.twitter.com/dqEASCyaai

While Paul was doing his part of his count, I was making my count on No.6 and No.3 tanks and around Lordship Marsh.

A single drake Common Pochard was with 32 Tufted Duck, 17 Common Shelduck, 19 Mallard, 16 Eurasian Teal, 10 Northern Shoveler, 21 Gadwall, 53 Eurasian Coot and 2 pairs of Little Grebe. The Black-tailed Godwit flock consisted of c500 birds feeding in the vegetation at the edge of the water and a Common Redshank was with them.

The Marsh Harrier was quartering the area (for a change) and kettles of Common Buzzard were riding the thermal updrafts. There were plenty of hirundine activity alongside Common Swift (as PR mentioned earlier).

The Long-tailed Duck obviously made it on the WeBS count, so fame was secured. The pools didn’t have much apart from a couple each of Common Shelduck and Eurasian Teal during my visit, but the ‘Splashing Pool’ conjured up 4 Tufted Duck.

The ‘phalarope pool’ at the west end of No.3 tank.

Along Lordship Lane the Reed Bunting, Reed and Sedge Warbler were still vocal but not as enthusiastic as before. The fields adjacent to the lane were flooded and if the Lapwing pairs breeding here had it bad when their nests were ploughed over by the farmer, they also had the indignity of having their second clutch waterlogged. The same fate befell a pair of Oystercarcher which abandoned their nest as well.

Some images of the flooded No.6 tank.

I was out this morning along the River Weaver and around No.6 tank.

A Common Whitethroat, Blackcap and Willow Warbler were all seen and heard along Brook Furlong Lane and both Reed and Sedge Warbler were active throughout my walk.

Along the River Weaver and duck numbers were low with just a few Common Shelduck and one pair with a brood. The Tufted Duck, Mallard and Gadwall were present in small numbers, but nothing to ignite the passion. A pair of Avocet were showing aggression to anything or anyone that invaded their territory as were several Oystercatcher.

Out on Frodsham Score salt marsh and c1000 Canada Goose were marching out over the mudflats in long columns and c30 Greylag Goose were on the Manchester Ship Canal with several goslings.

Onto the Canal Pools and a pair of Mute Swan were on the pool that they bred on last year, but haven’t attempted to breed this year?  More Avocet could be heard calling on a hidden scrape but were out of sight due to the overgrown vegetation.

The Long-tailed Duck was back on the ‘phalarope pool’ with a few Eurasian Teal for company. It was nodding off when the sun shone, but the constant harassment by both Common Shelduck and juvenile Eurasian Coot made its attempts at sleeping difficult.

A flock of 150 Black-tailed Godwit dropped in for a while.

Looking over No.6 tank and c400 Black-tailed Godwit fed in the shallow waters with c230 Black-headed Gull. The gulls took to the air when a Common Buzzard passed over leaving the godwits unconcerned. The ducks included: 32 Common Shelduck, 36 Tufted Duck, 21 Mallard and 14 Gadwall, 17 Northern Shoveler, 15 Eurasian Teal, 4 Little Grebe, 56 Eurasian Coot all a countered for. The first Green Sandpiper of the summer was present briefly (per Phil Oddy).

A Marsh Harrier was about the reed beds.

Paul stopped off at the Gowy meadows on the way home and the river has burst its banks and flooded the meadows making many hardships for ground nesting birds in the area.

A Painted Lady fluttered by on the track before the rain came down.

An after work visit to the marsh to view the Long-tailed Duck which is still present on the ‘phalarope pool’ resting amongst c250 Black-tailed Godwit, several Eurasian Teal, Mallard and Common Shelduck. A pair of Northern Shoveler were also on the pool the male has started its summer moult and does not look so pristine now.

On No.6 tank were just c60 other godwits with the mass of Eurasian Coot and gulls, Common Shelduck, Mallard, Eurasian Teal, Tufted Duck, Northern Shoveler and Gadwall all feeding in the shallow waters.

Both Reed and Sedge Warbler are still vocal on the marsh, while a Cetti’s Warbler was seen carrying a fecal sac across across one of the lanes on the marsh.

Several Common Shelduck were busy feeding in a waterlogged field alongside an Oystercatcher and another Brown Hare was spotted. I

bumped into Arthur Harrison who had taken advantage of a break in the rain to catch a look at sea duck on the scrape.