I parked on the M56 bridge on Brook Furlong Lane before walking along lane out to The Weaver Bend  this morning. The hedgerows were alive with Chiffchaff singing and chasing each other. A Cetti’s Warbler was heard hiding away from sight.

On the River Weaver were numerous Common Shelduck, Mallard, Tufted Duck and Canada Goose being noted with smaller numbers of Gadwall with Eurasian Teal and 2 Goldeneye lingered a little longer.

There were 4 Avocet, 8 Oystercatcher, 1 Common Sandpiper and c30 Black-tailed Godwit on the river bank. 14 Mute Swan made their way towards the Manchester Ship Canal. Several Raven were feeding on a sheep carcases and a Common Buzzard sat on a post waiting its turn to gorge on its meat.

On to No.6 tank were more Chiffchaff calling from trees alongside the ramp track. A couple of Marsh Harrier were high up over the reed bed. Several Eurasian Teal, 20 Mallard, 40 Northern Shoveler, 64 Common Shelduck, 40 Tufted Duck and 10 Gadwall were all present on the water and a flock of c80 Black-tailed Godwit passed overhead on their way to the Mersey estuary. c100 Eurasian Curlew were feeding on No.3 tank’s mitigation pools and more Eurasian Teal, Northern Shoveler, Mallard and Lapwing.

Out on the Frodsham Score salt marsh were several hundred Pink-footed Goose feeding close in to the edge of the marsh but took to the air and moved out towards the river. The Ince marsh fields had 23 Mute Swan in their usual place and another herd could be seen out by the river but to far to identify.

Walking back along Lordship Lane a flock of Linnet feed in the stubble field and were ambushed by a Sparrowhawk. Also noted 6 Reed Bunting were on territory along the lane.

A few highlights of my wanderings today.

Starting this morning along Lordship Lane, a Green Sandpiper and a Common Snipe were by the western ramp to No.6 tank with a Great Spotted Woodpecker and 2 Jay towards the Growhow Works.

4 Water Pipit were on No. 6 tank along with a Marsh Harrier and a Redpoll spp flew over.

A walk to the Weaver Bend produced 14 Avocet, a male Wheatear, 5 Goldeneye, 2 Mistle Thrush and a pair of Stonechat.

The pipes of No.1 tank held a female Wheatear and another pair of Stonechat.

I made an after work visit with a walk around No.6 tank. The highlights were 3 Short-eared Owl, 3 Marsh Harrier and a ringtail Hen Harrier.

Ducks were very much in evidence with pairs bonding and drakes squabbling for the attention of their future mates.

Again Chiffchaff were singing from all areas and a Cetti’s Warbler joined in for good measure.

A walk around No.6 tank in glorious sunshine with the background sound of Chiffchaff and 4 Cetti’s Warbler filling the air.

A couple of Marsh Harrier were actively chasing a Common Buzzard while the ringtail Hen Harrier was performing really well.

Walking back along Lordship Lane and a Short-eared Owl perched on a post didn’t linger for long.

An estimate of c200 Raven were heading south for the night.

I took a walk around the River Weaver after work this afternoon. There were Tufted Duck and Common Shelduck in good numbers with a few Mallard, Eurasian Teal and Gadwall being present. c200 Canada Goose and 3 Mute Swan were also on the river with a pair of Great Crested Grebe in amongst the reeds.

Four Oystercatcher made a racket as they made their way along the water and 3 Ringed Plover were noted while a single Black-tailed Godwit was on the Manchester Ship Canal bank.

A flock of Curlew made their way out to the estuary followed by a flock of Black-tailed Godwit. A Common Sandpiper crossed the ship canal and a party of Raven were feeding on a sheep carcass on the river bank. 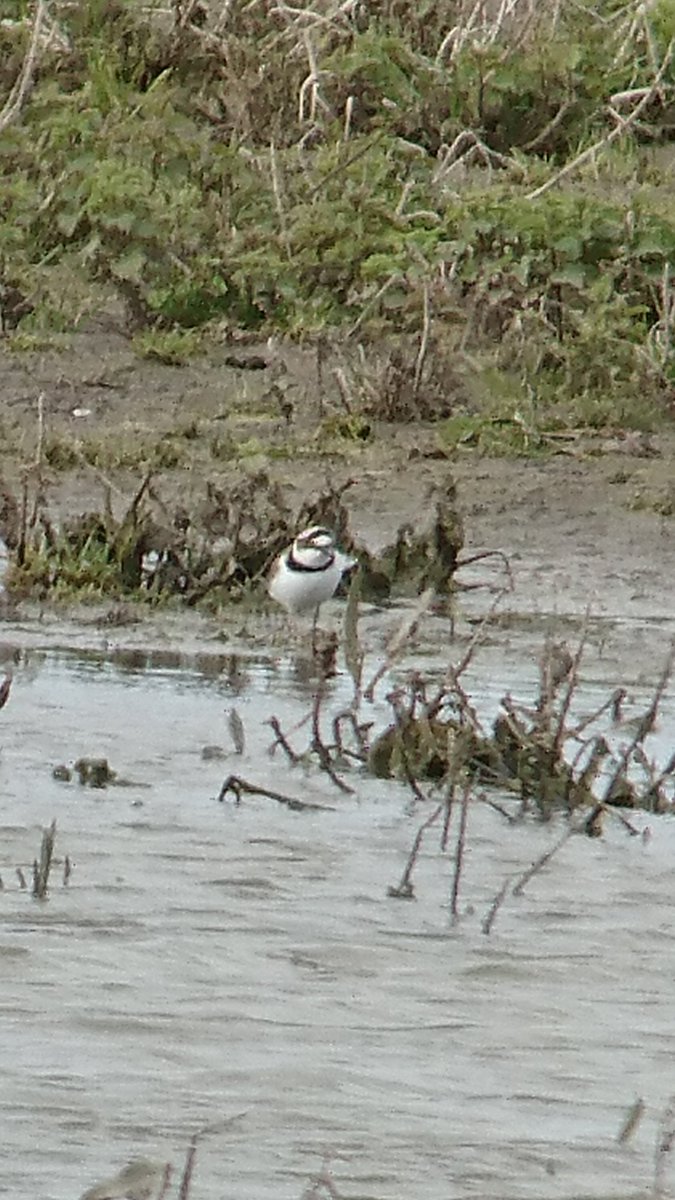 A walk around No.6 tank produced some fine birding with a couple of Pink-footed Goose circling the tank before heading back to the Mersey marshes, 41 Tufted Duck, 130 Eurasian Teal, 4 Gadwall, 74 Shoveler, 21 Common Shelduck, 3 Ruff, c100 Curlew, 1 Little Grebe and 43 Coot.

A couple of Marsh Harrier were out and about while the ringtail Hen Harrier was sat on the flattened reed bed before rising and having a set to with a Short-eared Owl.

The mitigation area had 12 Shoveler, 2 Gadwall, 13 Eurasian Teal and 31 Coot.

Plenty of Chiffchaff filling the evening air but still no hirundines in the cold but bright north-westerly wind. The Raven movement to the south continued at dusk.

I started my BTO WeBS count with a walk at Ince where the pools held reduced numbers of Mallard, Eurasian Teal, Gadwall, Tufted Duck, 2 Little Egret, a single Little Grebe and a drake Northern Shoveler. A flock of 30 over flying Black-tailed Godwit passed overhead heading out to the Mersey estuary.

On to the Manchester Ship Canal path and a look over the Frodsham Score salt marsh, a raft of 28 Tufted Duck were on the waters of the canal with several Gadwall, Mallard and Eurasian Teal. Out on the score marsh were 5 Whooper Swan still grazing in the same area as yesterday alongside many Canada Goose, Greylag and Pink-footed Goose. Several Little Egret and Grey Heron were feeding as the tide came in and a the beast (Ruddy Shelduck X Common Shelduck) from the darkside of the river paid a visit with some Common Shelduck on the tide rise.

There were 36 Mute Swan in their usual field on Ince marsh fields and a Peregrine passed overhead out to the salt marsh but turned back when confronted by 3 brutish Raven.

The ringtail Hen Harrier was again hunting over No.6 tank then flipped over the bank and disappeared over Lordship Marsh. Three Ring Plover were again on the cleared area.

A Peacock Butterfly was out in the warm sheltered side of the marsh.

A walk through Tatton Park today revealed singing Chiffchaff but perhaps the highlight was a Nordic type Jackdaw frequenting the east end of Melchet Mere. This is the second time I have come across this bird, the previous encounter being last year.

I took a stroll along the Manchester Ship Canal during today’s high tide. There were 7 Whooper Swan out on the salt marsh with c200 Pink-footed Goose at the river’s edge.

The first Wheatear of the Spring was catching flies on the far bank so put the marshes in on the Spring migration game. A Great Crested Grebe flew along the water and crash splashed into the water. The ducks included Tufted Duck, Mallard and Gadwall in good numbers on the cut with plenty of Common Shelduck on the salt marsh.

32 Mute Swan were grazing alongside the Holpool Gutter and c30 Curlew were with them. The usual Raven and larger black back gulls were in competition for the dead sheep spoils left on the marsh after the big tide and several Common Buzzard were displaying, one of which was almost white.

A pair of Ringed Plover were on the proposed sand extraction area and a Marsh Harrier was seen to drop into the reed bed.

A Cetti’s Warbler was singing strongly at the junction of No.6 and No.4 tanks. Walking back along the ship canal and the tide was at its full height with c20 Little Egret, 2 Great Egret and several Grey Heron were all in a feeding frenzy at the advancing edge of the tide.

A Salford council wheelie bin washed up on the canal bank must have drifted 30 odd miles west along the canal from its homeland.

A pair of Stonechat and several singing Chiffchaff along Alder Lane towards Marh Farm.

An after work visit to No.6 tank resulted in seeing 2 Marsh Harrier and a Short-eared Owl.

Had a walk around the River Weaver and then a look over No.6 tank after work today.

A pair of Stonechat were on the fence on No.1 and a Brown Hare tried to flatten itself in the short grass before making a dash for it while I past by. There were many ducks species on the river with Common Shelduck, Mallard, Eurasian Teal, Gadwall, Tufted Duck and c300 Canada Goose being present. A pair of Great Crested Grebe also being present.

A small flock of Avocet made their way out to the Mersey estuary to join a group of Redshank and Oystercatcher feeding on the mud bank.

Onto No.6 tank the 2cy ringtail Hen Harrier made its way over the flood water and settled in the reed bed much to the concern of the resident Lapwing pairs. A Short-eared Owl flew high over the tank hassled by a couple of Raven which were en route to their bed, the owl was later seen hunting over the Hoverforce field along Lordship Lane.

Observer: Paul Ralston (images 2-3). Other images from archive by WSM.

An after work trip down to No.6 tank after a tip-off from Paul Miller who had earlier found a couple of Water Pipit on No.6 tank. It didn’t take long before the pipits which were with 12 Meadow Pipit and a couple of possible additional wipits.

The sound of distant Pink-footed Goose echoing from Frodsham Score.

There was an increase in the numbers of Eurasian Teal with c780 birds present. Also noted were 31 Tufted Duck, 6 Gadwall, 21 Mallard, 7 Common Shelduck and 34 Northern Shoveler.

The real treat of the evening was to have female Marsh Harrier, ringtail (1 winter male) Hen Harrier and a Short-eared Owl in the same binocular view. The ringtail flew through and landed for 15 minutes out in the open while c30 Common Snipe were disturbed by all this raptor action. A Common Buzzard once again took its opportunity to take out a teal from the deep flooded vegetation.

The movement of Raven leaving the marsh against a stunning sunset to their Welsh homelands was again impressive.