A skein of Pink-footed Goose were heading south over the A56 through Helsby on my way to the marsh this morning. Arriving at No.1 tank a pair of Stonechat were sat on the fence line that crosses this tank. Raven were riding the breeze above the steep banks and indicated the stiff wind that blew through the marshes today.

Onward to the path by the Manchester Ship Canal and 2 Mute Swan, 5 Great Crested Grebe and 4 Little Grebe were noted. A Common Sandpiper was flushed from the bank and settled after a short flight.

A walk along the river revealed  a flock of 300 Canada Goose heading to the Weaver estuary leaving Eurasian Teal, Gadwall, Mallard and Common Shelduck behind. Curlew were flying inland to their feeding grounds and a dozen Black-tailed Godwit went out to the Mersey estuary in the other direction.

No.6 tank and its stretch of open water held the usual ducks with c 40 Pintail and Eurasian Teal being notable as were a flock of Black-tailed Godwit.

No 3 tank held onto a flock of flighty Wigeon on and off one of the scrapes with more Eurasian Teal, Mallard and several Common Shelduck also present.

Looking over Lordship Marsh from the junction of No.4 and No.6 tanks produced the Whooper Swan herd which were near Hillview Farm hidden behind the hedges. A small flock of Black-tailed Godwit dropped into the same field to feed.

During my period of observation I checked on the Eurasian Teal flocks that were quite impressive last weekend. The heavy leaden grey clouds and stiff wind provided some challenging light to view and photograph in those conditions and was reflected in the dull grainy images attached. I estimated a flock of c800 Teal hiding mostly in the daisy beds with 24 Shoveler and some Pintail (PR had seen earlier). A young/2cy Marsh Harrier was quartering the reed beds with another two over No.4 tank.

A walk over to the Weaver estuary on the chance of seeing a couple of Scaup that Dave Craven had spotted flying over from Hale drew a blank. On my arrival a good selection of ducks included: 19 Common Pochard (18 adult male and immature male), 20 Goldeneye (imm/females), 21 Tufted Duck, 23 Gadwall and a flock of 70 Curlew flying low over the water. A couple of Stonechat sat up on dried grass stems by the rivers edge.

Walking back in the dark and only illuminated by the neon lights flickering off the water from Ineos Chlor works across the river was made even brighter by an imm/female Red-breasted Merganser which flew up settled by the Sluice Gates. This bird is the one PR had last year. 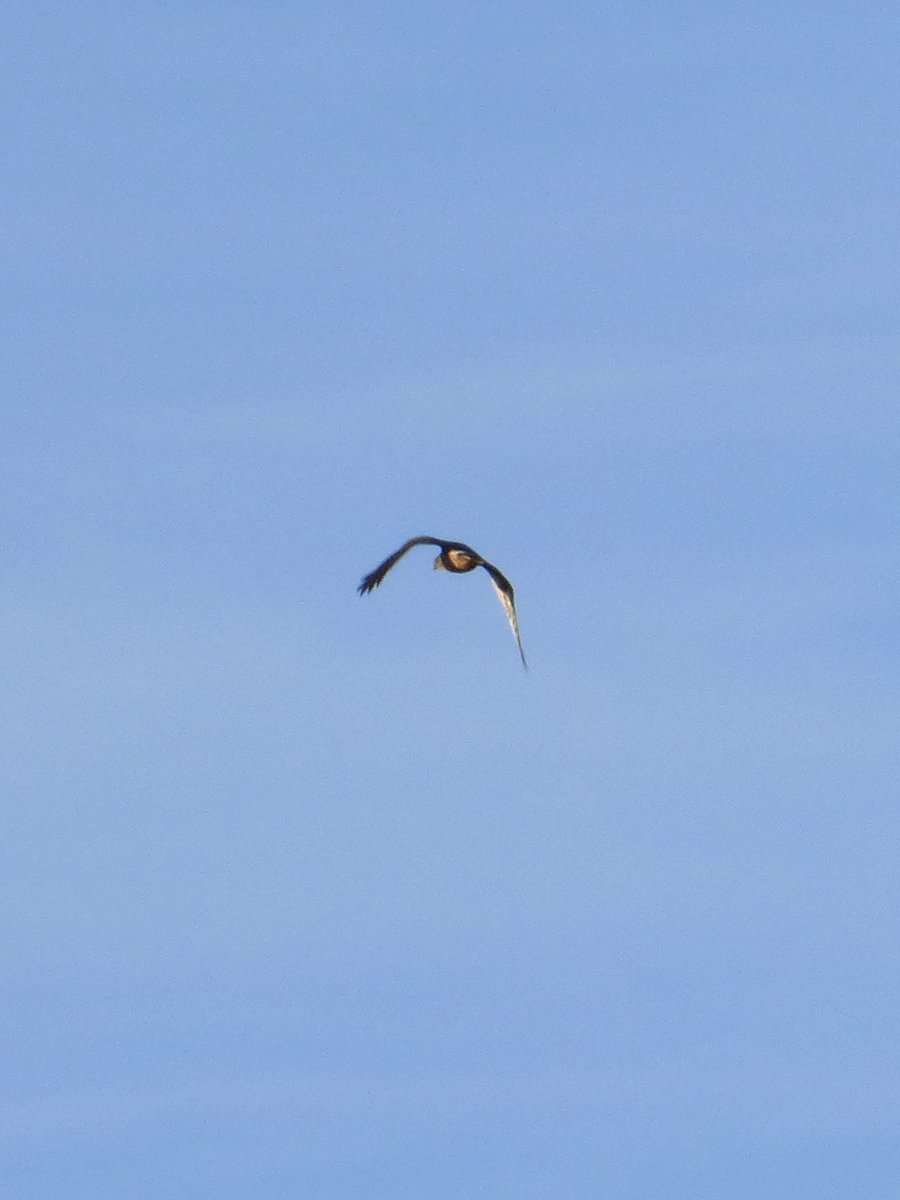 A Great Egret joined up with the Whooper Swan herd on fields adjacent to the east bound carriageway of the M56 on Lordship Marsh today. That makes three (Cattle, Little & Great White) egret species that have mistaken the whoopers for something a little less swanish.

The wandering ringtail Hen Harrier was over No.2 tank this afternoon.

I managed an earlier than normal dart from work and with the evenings slowly creeping towards the light I had roughly an hour to do the biz.

Looking across the waters of No.6 tank gave me amble opportunity to watch c1250 Eurasian Teal hiding in the dense flooded vegetation. Their numbers were much reduced from the weekend and with the weather spring like in the last couple of days, I guess the others have dispersed out to smaller water bodies elsewhere. A solitary Eurasian Wigeon was with the 31 Mallard that were also present. There were 56 Common Shelduck and 23 Shoveler.

A small party of 12 Ruff, circled the tank and then flew out again. The distant sounds of Pink-footed Goose were heard but not seen.

A female Marsh Harrier did its usual circuit before dropping down to roost and the Peregrine was back on the blue topped chimney for the night.

A flock of 200 Curlew flew in from the east over the Weaver Bend and with them were 10 Black-tailed Godwit.

The last of the evening light saw 7500 Starling murmurating over No.4 tank and managed a few shapes despite their lower numbers.

I started off walking along part of the Manchester Ship Canal and the River Weaver through Frodsham and Ince marshes this morning. There were 12 Mute Swan on the ship canal with another 4 on the river. c1000 Canada Goose were sheltering on the Weaver estuary well away from the shooting which was taking place on the salt marshes. A single Goldeneye was in the company of a small number of Eurasian Teal, Mallard and Common Shelduck, 7 Great Crested Grebe and 5 Little Grebe were all noted.

A flock of c200 Pintail passed overhead heading out to the estuary and a short while later another flock of c80 went the same way. A Common Sandpiper was on the river edge and a pair of Stonechat in the reed bed.

On to the canal path and even more Canada Goose were on the salt marsh near to the canal bank as shooting was taking place out by the edge of the river. The plover flocks were back to their nervous state and bunching together as the guns were blasting away. The Lapwing flock settled back down but the Golden Plover (are even more nervous, if that’s possible) and flew east along the ship canal.

The Mute Swan herd were in the fields alongside the Holpool Gutter with a single Greylag with the remaining solitary Pink-footed Goose. It was good to see my family group of Eurasian White-fronted Goose still here and eventually joined up with the ‘pinky’ for good measure.

Several hundred Pink-footed Goose were still present grazing on Lordship Marsh and the Whooper Swan herd were tucked away behind a hedge near Hillview Farm.

At least 2 Brambling were with a group of Chaffinch at the junction of No.6 and No.4 tanks and another pair of Stonechat were near the model flying field at the end of Moorditch Lane.

While Paul was taking the earlier shift I was settled on the banks of No.6 tank when a dog walker (surprisingly head to toe in camo gear) decided he would walk along the top edge of No.6 tank flushing all of c3000 Eurasian Teal. They settled back into form when he disappeared into the distance but never reemerged from the flooded daisy beds. It was interesting to watch their behaviour when feeding in deep cover The entire flock would panic and explode from the vegetation as one. The sound of distant gun fire (a couple of miles away) made them very nervous and whenever a shot blast sounded they would raise their heads in alarm. It’s been an incredible build up in the numbers of Teal to No.6 tank over the last few weeks. The combination of recent cold snaps and wild-fowling activity on both the Mersey and Dee marshes may have contributed to teal using this relative “safe” sanctuary. The image above illustrates the dense numbers of ducks spooked from their feeding area.

A flock of 26 Golden Plover flew over but the flooded No.6 was to deep for their needs. A small group of Wigeon were on No.3 tank with c300 Canada Gosse.

I made my way along the track between No.6 and No.3 tank and watched a male Merlin perched on top of an elder tree but, has I reached for my camera it detected my movement and the opportunity was gone (and so was the falcon). This happened a couple of more times later in the day when another/or the same male was watched hunting up a passerine high above the wind turbines on No.4 tank.

Watching from the south-east corner of No.4 and the distant herd of 24 Whooper Swan could be seen partially hidden behind the hedgerow and hadn’t moved since PR had them earlier. The large gathering of Pink-footed Goose were still in situ.

My walk continued out to Ince marsh fields where the White-fronted and solitary Pink-footed Goose were still there and I crossed paths with Paul Miller & Frank Duff.

Continuing to the my watch point looking across the salt marsh revealed a female Merlin, several Little Egret and a lone Great Egret in the distance.

A Stonechat was busy popping up on the sedges by the side of the ship canal while a Green Sandpiper called overhead.

The ‘Splashing Pool’ looked vacant until the yapping calls of geese from the south reached a crescendo and c2000 Pink-footed Geese flew in (presumably the birds from Lordship Marsh) over my head with the splattering sound of goose shit raining all around me (fortunately there wasn’t a direct hit). What started off as a dull miserable day tickled me pink in the end.

A Peregrine was on the blue topped chimney and a female Marsh Harrier came into roost at dusk.

Eurasian Teal drifting into vegetation to feed on seed heads.

A few hundred Pink-footed Goose with a couple of Barnacle Goose alongside the M56 (eastbound) on Lordship Marsh.

Image by Rob Pitt taken at Eastham looking east towards the south Mersey marshes with a small flock of Dunlin bunching up.

A quick visit this morning and a look over the salt marsh from Ince Berth. A Great Egret and several Little Egret were about the out marsh with c2000 Canada Goose grazing on the short grass.

The 4 (Eurasian) White-fronted Goose made it into the new year within their usual field alongside the Holpool Gutter with a few Greylags, 17 Mute and a solitary Whooper Swan. Another Whooper flew over heading towards Lordship Marsh to join the already present (but hiding) herd close to Hillview Farm.

Several skeins of Pink-footed Geese were leaving the salt marshes to head inland.

A total of 3 Stonechat could be found on No.4 tank.

No.6 tank continue to hold onto hundreds of Eurasian Teal with (80 Pintail a very high number for here and reported by another birder) c50 Shoveler and 4 Wigeon.

It was great to see that the White-fronted Geese have made it into 2019 along with a solitary Whooper Swan. Both Great & Little Egrets and skeins of Pink-footed Geese moving about today. More here: https://t.co/pOylJ1x7zX pic.twitter.com/mvQz9iTKeX

It was very busy down the marsh today with more birders etc. than I have seen for a long while. Not much in the way of birds, although your wish for a quick end for the rabbit worked as it was dead and being recycled by a Raven and Magpie as I drove up to the old log.

I had a single Fieldfare by the farm and a Stonechat by the horse paddock, a Kestrel was hunting over the south bank of No.6 as were 2 Marsh Harrier.

A ringtail Hen Harrier were seen over Ince salt marsh from the Hale side of the Mersey estuary per Dave Craven.